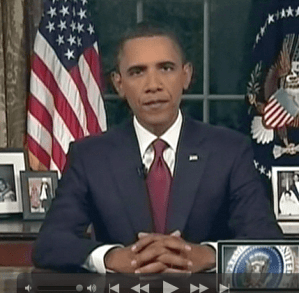 President Obama gave a speech tonight – second one from the Oval Office in his 19 months in office. It was a yawner. What’s going on here?

First of all I want to confess I’ve not reviewed Obama recently because he basically is the same. In delivery. Think of teleprompter, predictability, cadence, professorial, etc. See here and here for a lot more detail. But tonight I was challenged by Michael Hyatt on Twitter, who said;

Now Michael is a friend, and a HEAVYWEIGHT (sorry for the caps) in the blogosphere and Twitterland, as well as respected CEO, so I couldn’t refuse. Otherwise I would have passed it by again.

It IS hard to be apolitical, as I try to stay away from the politics of the content in most reviews. But in this 19′ speech anyone could have said “What’s the point.”

Here are the opening few minutes of his speech in good quality. For experiencing the communication of the President, you really only have to look at the first minute. It doesn’t change. (But look here to get the entirety in less quality.)

I could go on, but this is already too much politics for an ‘objective’ communications blog. But thanks for the prompt Michael – this gets the juices flowing.

More importantly, what do YOU think?

13 comments on “Obama Speech More of the Same”