A leader grows into the "Fundamental State", according to Robert Quinn, and this is a concept we can apply to President Obama – and any new leader. In Obama's case, we could compare his effectiveness as a campaigner (Normal State) and his effectiveness as a leader now that he is President (Fundamental State). But maybe it's too soon in his leadership, but not too soon in his communications. For we can apply the concept to speaking and communicating as well. We know that effective leaders are usually great communicators – the confidence of leadership often self-evident in confident behavior. This is generally true of Obama, with exceptions noted below.

Robert E. Quinn is a University of Michigan professor who introduced the concept of the Fundamental State of Leadership – a heightened perspective, and one that’s inherent in all of us. Quinn's interesting concept appears in the Harvard Business Review, and it is relevant to business and politics…

“In the normal state people tend to stay within their comfort zones and allow external forces to direct their behaviors and decisions. They lose moral influence and often rely on rational argument and the exercise of authority to bring about change…the result is usually unimaginative and incremental – and largely produces what already exists. To elevate the performance of others, we must elevate ourselves into the fundamental state of leadership.”

We’ve all been there in our personal and professional lives – a time of crisis where we rise to the occasion and overcome the challenge. (For example President Bush leading us during 9/11, but not so much before or after.) If we force ourselves into the Fundamental State, rather than waiting for crisis to knock at our door, we'll get better and better. And so too is the case with communications. Quinn says that getting there requires a shift along four dimensions: 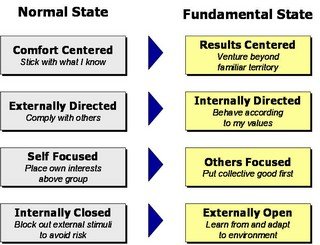 So, what does this mean for us as communicators?

Now in President Obama's case, let's hope his Normal State of communications (over dependence on the teleprompter, speaking in what I call 'Obama bursts', many 'ums' and 'ahs' in interview settings) will transform into the Fundamental State, where he can communicate more openly and skillfully, even though in unfamiliar territory.