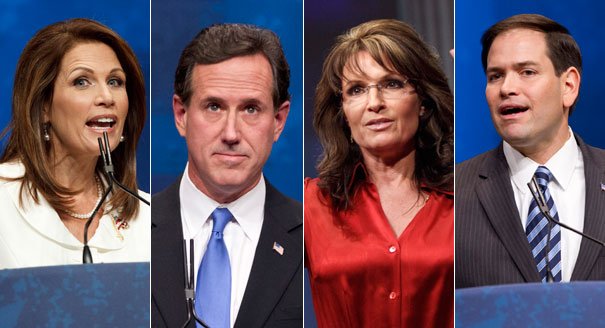 For three days last week I heard (and experienced) over 100 leaders speaking to an audience of 11,000 – including a couple dozen Senators and Representatives, Presidential candidates, authors, celebrities, and news anchors. (Most of the videos are available here.) It was an amazing experience at CPAC. This post is purely about the insights from this total speaking immersion – not the politics. What can we learn from the experience each person created for the audience? How did these folks handle the pressure? And what is the penalty when using the teleprompter as a crutch? (I sat in line with a teleprompter every day, and observed closely.)

This post is too long anyway, so I’ll pause for the key point here, and then if you want you can go on and read some notes on the many other speakers – most good, some not so. But either way…

Sure, the experience includes the messaging, but it doesn’t matter how great your messaging is if you get in the way. People can tune out speakers in a few minutes if not seconds, and we tend to ignore this fact at our peril. The unconscious cues – and there are dozens of key ones – go a long way at getting our message across – or not. Spend three days listening to hundreds of different communication experiences like I just did, and it will be even clearer.

Notes on some of the other notable speakers at CPAC:

Governor Mike Huckabee – no teleprompter, excellent and funny. Candor, fire. Why don’t all speakers look at Huckabee and Rubio and channel them.

Governor Bobby Jindal – great presentation with facts. Reeled off his Louisiana accomplishments, but with fire and energy and no arrogance. This is not the Bobby Jindal who did so poorly in making the State of the Union rebuttal in 2009.

Governor Bob McDonnell – no teleprompter, and he walked the stage! Surprisingly the only one to do this, and he was very effective. Also told stories,  and forceful.

Carly Fiorina – excellent, and so much better than as CEO at HP. No teleprompter, and used a script well as reference.

Ann Coulter – funny we expected, and she was. Also outrageous, as she could only get away with. I was impressed that after her start she did have a message, not just comedy.

Laura Ingraham – good like Coulter. Used a pen with script – seeming to mark things off as she went along. She wasn’t of course, but it was an interesting, and effective, technique.

Al Cardenas – Dynamic content from this head of the convention. He is a very rough hewn, high energy guy as we saw in several introductions and spontaneous communications. But when he gave his primary keynote speech, he reverted to the teleprompter, and his energy seemed to be sucked from him – he just flattened out.

Senator Jim Demint – Knew his message and delivered it well, no notes. Conversational but not casual.

Congresswoman Michelle Bachman – One of the best users of the teleprompter and OK. But have seen her better in her stump speech, coming from the heart.

Congressman Jim Jordan – not as well known, but he will be. He had a small paper with notes, and didn’t need them. He was powerful, informal (no jacket) but focused. Strong message.

Speaker John Boehner – used teleprompter badly. Audience liked his message, including him tearing up once, but he became mechanical in reading.

Governor Rick Perry – best I’ve seen him. Fiery, with notes that he didn’t use. Spoke from the heart, pauses, didn’t forget anything. Not the Rick Perry of the early debates.

3 comments on “Insights from a Speaking Immersion…”