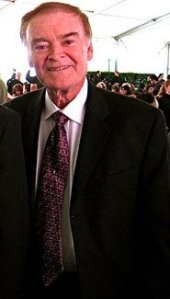 It’s great to go to a fundraising luncheon and learn something from an old pro.

It’s so easy to inform - not always easy to influence. Everyone informs: productmanagers, sales, admins, even high-level executives. We at Decker have a strong biastowards influence. In fact, we put on every one of our program materials: Information TO Influence.

Many business executives we work with try to rationalize that they aren't always influencing. Instead we hear, “My weekly call is just an update," or “This All World I'm leading is just to inform the team on X," or "I just need to update the executives on the status of this project," etc...  Those are the opportunities that NEED to turn into an influential communication experience – and I was reminded that this last week by past San Francisco Mayor, Frank Jordan.

I attended a Salvation Army holiday luncheon this last Wednesday that honored Mayor Frank Jordan. Our Chairman, Bert Decker, is also the Chairman of the Salvation Army Advisory Board of San Francisco and led a great event featuring his own short film on Frank Jordan (No bias! Well – at least I don’t think so).

The event was to honor Frank Jordan and his 50 year involvement with the Salvation Army. He was appointed to be Chief of Police in the 1980s when Diane Feinstein was the SF Mayor, and Mr. Jordan went on to become Mayor in 1992. Throughout his leadership in SF, he had always been involved with the Salvation Army in some way. I’ve included the video below, it’s worth the 6-7 minutes to get a sense of what he did.

It was short and sweet, informative and influential – and it made me walk away with a newfound respect and knowledge of the man. One of my favorite quotes (that I plan on using) was his opener on the importance of brevity: "As King Henry VIII said to his third wife, 'I won’t be keeping you too long.'" (Great SHARP, by the way.)

The key piece is this: he added value and influenced the hundreds of luncheon attendees. Instead of taking the easy road of just thanking people and stating his high opinion of the Salvation Army, he spoke of the success of his career guided by a strong, clear point of view: “You need to live a life of value." This simple statement changed his entire seven minutes of influence.

This is is what any product manager, sales, admin, or high-level executive can do in their dozen times a day they communicate with others. It’s a way of thinking and an attitude. If you open your mouth, what is the value to the audience and change you want to happen? So to end how I began, keep your messages on focused on your audience. Continue to add value – and you will get influence!