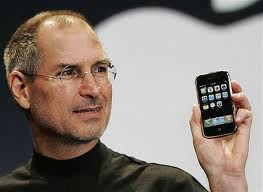 Above all, he communicated his brilliant concepts to millions of people, brilliantly.

So much is now being said about Steve Jobs’s brilliance – and deservedly so. He was one of a kind. Here is the acknowledged leader and innovator in the world of computers, media, music and business – and yet on the side he built Pixar into the best animation studio in the world and became Disney’s largest stockholder. Amazing.

But what strikes me most about Steve Jobs is that he had no peer in inspiring and motivating others. Not just his employees, not just his customers, but the world. Because of his communicating ability he became a rock star. I remember when I got up at 5AM to go to Moscone Center in San Francisco to hear him announce the iPhone, and I was too late – the line was already three blocks long. Who could have ever predicted that an executive who really is just making a product announcement would be able to command such attention. Amazing.

He was unparalleled. We had him on our Top Ten Best Communicators list several times – and actually he could have been #1 every year but that would have been boring.

He was never boring. He brought us so much. He is a worthy model to emulate. He will be so missed.

3 comments on “Steve Jobs the Communicator”