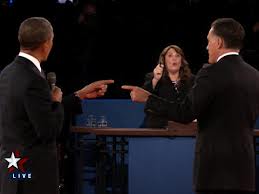 First thoughts – they both came to play. President Obama and Governor Romney were contentious, confrontive, strong, and articulate. If you favored one guy, he won.

But the audience lost.

So many conflicting stories. Even the fact checkers are conflicted. I guess the best offense is a good defense. So we won’t talk specific issues here, but behavior, because as usual, Behavior Reigns.

Rising above the issues and arguments – there were so many opportunities to cast a vision. To lift the audience up. Neither candidate took the opportunity. In our communications coaching we always urge our clients to think BENEFITS – what’s in it for the listener. Both Obama and Romney kept it all about THEM. In different ways… 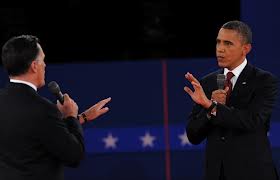 He recovered from the first debate. More energy, combative and interruptive where appropriate. (And maybe where not appropriate for a President.)

On the positives, several times he had rhetorical flourishes that were typical in his 2008 campaign. He moved around well, had good eye contact with Moderator Candy Crowley. And he reviewed the VP Debate split screen when sitting and listening as he did not pull a “Biden” by smirking and eye rolling when Romney was speaking (though there were a couple of ‘slow blinks.’)

On the negative side, his cadence often gets in the way of believability. Too often we feel it is a ‘speech’ rather than the authentic thoughts and feelings of a man – our President. And when you add to that the tilt of his serious face – those who dislike him would say arrogance – we don’t feel the likability that the polls show. 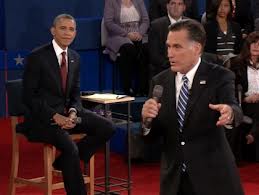 He continued his behavioral performance from the first debate – confident and assured in manner and voice.

On the positives, he often used the ‘rule of three,’ and had a great command of facts and figures. He often said “We don’t have to settle for this” and “We don’t have to live like this.” Romney again held himself like a CEO, and the Town Hall format gave him a chance to ‘stride’ without being stiff and jerky, as he often is. Many said he wouldn’t relate in the Town Hall setting, but he did just fine with that, as did Obama.

On the negative side, Romney asked direct questions of Obama rather than making statements AT Obama. When we rehearse executives in Q&A, we advise ending on a positive statement of your Point Of View, rather than an open ended question at an adversary. This happened several times, and Romney looked defensive as Obama parried him – and particularly rattled with the Benghazi question at the end, where Romney lost a big opportunity to make an important point. (I expect we’ll hear more on this in the days to come.)

No clear winner here, and the beat goes on. This will be a tight race to the wire, with only a sliver of folks undecided. There will be two factors that will sway those undecided: 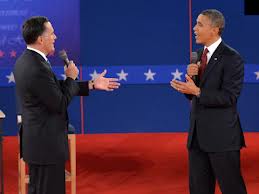 So next weeks debate could be telling – we’ll see.