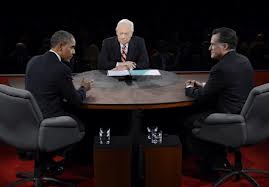 We’ve always said that “Behavior Reigns” in these debates. This last critical Presidential Debate of this important election is no different. Obama won – but why? And did Romney really lose? What will be the communication experience left in the voters mind – when they are in the voting booth?

President Obama won in the ‘eyes’ of the viewer for two main reasons:

Governor Romney lost in experiential terms because he lost his spark. It’s not that he was as low energy as Obama was in the first debate, but he was: 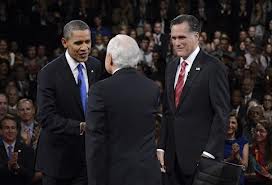 Above it all is what people take away, and you know where that makes a difference – in the voting booth. The communication experience from this debate now makes a level playing field.

President Obama was aggressive and in command in this debate, offsetting his “sleepy” performance in the first debate. Perhaps not “Presidential” but definitely offsetting the earlier experience.

Perhaps Romney was trying to act Presidential – pass the Commander In Chief test. He actually did, though perhaps it was ill advised to be comparitively passive in the effort and above the fray at this critical point in the campaign. Does he really want to leave the communication experience of this debate in voter’s minds two weeks before the election? Well, maybe. Maybe it will be seen as Presidential when added to the experience of his first debate.

What do you think?

Lots of Republican debates this year – more than ever. Many lessons learned in considering the behavior of communications, and believability, and leadership. Why doesn’t Romney catch on? And why has Cain so quickly climbed the popularity ladder? These are a couple of key questions that provide important insight as … Continue reading →
Fall is here (though, we San Franciscans consider this summer), Q4 is wrapping up, and so begins the planning for end-of-year. For Decker, that means narrowing and locking in the short list of Top 10 Best and Worst Communicators of 2011. Here’s the fun twist – you can nominate! And, … Continue reading →