Everything should be made as simple as possible, but not one bit simpler. -Albert Einstein

In the wake of primary season and PAC spending mania, comedians Stephen Colbert and Jon Stewart have taken it upon themselves to shine a spotlight on the problems with Political Action Committees. It’s a complex issue, but they’ve made it tangible by using SHARPs (Stories, Humor, Analogies, References & Quotes, Pictures & Visuals) to grab our attention and go viral. 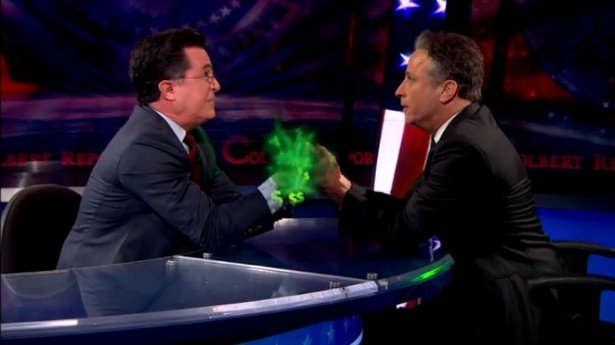 The PAC issue is nonpartisan – campaigns for Democrats, Republicans, Libertarians, Green Party alike use PACs as a loophole to bypass campaign fundraising limits and raise as much money as possible on behalf of (but not coordinated with!) candidates. That’s the big joke that Colbert and Stewart are exposing, and they’re doing it with skits on the Colbert Report, TV/internet spoof ad videos, and ridiculous humor.

Here’s the debut of their now ongoing joke, explaining, through use of a skit, the rules around candidates and SuperPACs:

Regardless of the politics, you must appreciate what they’re doing to communicate and explain a complex issue. So now it’s your turn: Think, when you’re next presenting an idea or procedure, is there a way you can use graphical or video images to make it clearer? Could you involve other coworkers to act a new procedure out, and use humor to make it memorable? Comment below and let us know what you think of Colbert and Stewart, or what you’ve done to grab your audience’s attention.