You may have heard of the backchannel when one is speaking, but have you heard of BackNoise? If not, it’s time you do. As blog post reader Paul Freet stated: “Backnoise is like the hammer in the 1984 Apple commercial.”

Paul hit the nail on the head. BackNoise is the hammer being thrown into the theater of public speaking.

In my blog post “Speakers – Be Aware, Twitter is Coming,” I affirmed that in any conference, event or speech setting where the speaker has a point-of-view and a message to deliver, the speaker is responsible for the experience. Twitter, BackNoise and other backchannel tools challenge speakers to step up their game in maintaining responsibility for their communications experience. Backchannel conversations compete for an audience’s attention. Presenters need to master the art of engaging their audiences more than ever if they’re going to be successful communicators of the future.

Unlike Twitter, BackNoise is an isolated conversation backchannel tool, centered around a single topic (or rather a single conversation name). Created by Keith McGreggor of Atlanta, BackNoise lets anyone establish these topical conversations quickly and easily, allowing those who know the name of the conversation to join in. These virtual conversations can occur during meetings, lectures, presentations and speeches – anywhere YOU may be presenting your message to your audience – whether you like it or not.

There have been many recent blog posts on BackNoise, (several listed at the end of this post) – most of which reference what transpired at the New Media Atlanta conference on September 25, 2009. My daughter attended that conference and had this to say about her experience: 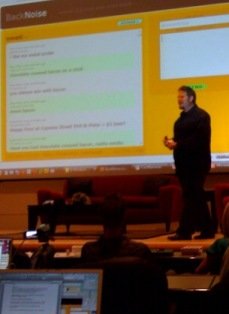 I’ve read about the BackNoise chatter at the conference changing the tone of the conference from excitement and enthusiasm in the morning to a negative, disheartened mood in the afternoon. I didn’t experience that because I wasn’t online to view it. (The BackNoise conversation wasn’t displayed publicly, but taking place on laptops throughout the auditorium – much like kids talking in class, uninterested in learning.)

Oblivious to the negativity spreading throughout the day on BackNoise, I first experienced BackNoise when the main speaker, Chris Brogan, took the stage and put BackNoise up on the screen behind him. Curious (because it was on the screen), I read some of the comments and found what I read to be mostly silly, boring, off-topic, uninteresting and frankly stupid. When Chris took the stage and began rapping, my eyes immediately shifted from reading comments of no interest to me on BackNoise to checking out what the heck this guy was doing. What I witnessed as Chris’ presentation continued was a personable, down-to-earth and confident presenter connecting with his audience, sharing a valuable message in a way that engaged his listeners. While I continued to see BackNoise comments scrolling on the screen behind him, I paid no attention to them because they couldn’t compete with him. I was so interested in what he was saying that BackNoise was just that – noise in the back that I tuned out because I wanted to participate in his communications experience.

I’ve watched the video of Chris’ presentation (and you can too on Chris Brogan’s blog). My daughter is right. Chris is an excellent communicator. He masterfully created, facilitated and led an effective communications experience for his audience. Realizing the effect of BackNoise in the shadows of laptop screens, Chris yanked the furtive chatter out of the laptops and threw it on the screen for all to see and for him to confront and control – which he did, artfully. Chris has demonstrated in Atlanta how communicators can tame the lion of backchannel distractions. (A more in depth review of how Chris Brogan tamed the lion is the material of a forthcoming blog post.)

What we can learn from the New Media Atlanta experience with BackNoise is this:

You’ll be hearing a lot more about BackNoise in the world of mainstream speeches and presentations. Don’t fear it, face it.

Some of the recent blog posts about BackNoise:

Unexpected Learnings: Backnoise Can Be Toxic

Backnoise Is The New Listening Channel

How To Present While People are Twittering

Backnoise: You’re Not Ready for This, or Are You?